Earmarking in the Multilateral Development System: Many Shades of Grey 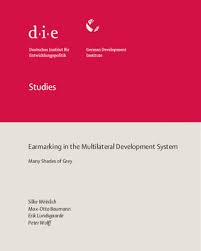 Multilateralism serves to bind powerful nations, discourage unilateralism, and gives small powers a voice and influence that they could not otherwise exercise. This extensive study, funded by the German Federal Ministry for Economic Cooperation and Development (BMZ) characterizes earmarking as “an unforeseen, ad hoc mechanism of funding multilateral organisations.”

Multilateral development organizations that were founded in the 1950s were designed to rely on core contributions provided without restrictions to the budgets of organisations, which are controlled by the respective intergovernmental governing body of the organisation. These resources are integral to the formal world of multilateralism, to joint decision-making and the delegation of authority to international organisations.

Earmarking is a way to work around existing multilateral rules and structures. Earmarking means that donors restrict resources to specific purposes, usually in terms of geographic and thematic scope. Earmarked funds are not formally part of budgets, they are also not subject to multilateral oversight. Member states feel the need to earmark if their interests are not aligned with either the majority in the governing board and/or the profile of the respective organization.

The United Nations Development System (UNDS) received 66 per cent of overall earmarked flows to multilateral organisations in 2017, and the UNDS regularly leads all other multilateral organizations in the receipt of such funding. The earmarked share of humanitarian and development related funding to the overall UNDS amounts to 79.4 per cent of overall contributions, which stood at $33.6 billion in 2017. The United States’ $6.1+ B contribution to earmarked funds for such purposes in 2017 matched the total of the other five of the top donor countries.  There are a variety of mechanisms through which earmarked funds are distributed, e.g., thematic funds overseen by specific actors and agencies within the UNDS. A rigid geographic and thematic specification might result from political or budgetary requirements that make it imperative that a contributing agency spends the funds on exactly this issue.

Negative consequences of earmarking include:

On the other hand, earmarking can inject more professionalism, a results-orientation and innovation into multilateral organisations.

Much of the report is devoted to the earmarking practices of Germany, the United Kingdom, Sweden and the European Union and their consequences. We’ll use the EU to illustrate the nature of the analysis.

The authors describe the EU’s bi-lateral relationship to multilateral organizations.  The EU’s Emergency Trust Fund for Africa  exemplifies this form of engagement. Much of the EU’s funds go toward crisis management, e.g., refugee migration. Specific domains of aid to UN organizations are ranked. Almost all of these ~$2B in funds are earmarked. The decision-making context in which the EU makes these donation is described, e.g., the importance of developing common positions among the EU’s multiple member states.  Choices that EU has made have “raised questions about the EU’s ability to engage effectively with partner organisations and respond to complex crises.” The Spotlight Initiative, a €500 partnership between the EU and UN that pursues eliminating violence against women and girls, is presented as an example of the problems EU earmarking has faced.

A thorough discussion of conclusions include, but are not limited, to the following:

The authors make five recommendations to the German government: