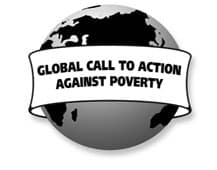 Global Campaign Against Poverty aims to “build a strong and progressive global action against poverty and inequalities with a Southern leadership to ensure that nobody is left behind”. It is a growing alliance with national coalitions in >100 countries that brings together trade unions, NGOs, the women’s and youth movements, community and faith groups and others to call for action from world leaders in the global North and South.