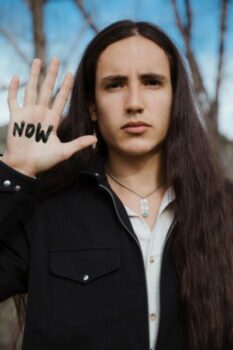 As a teenager, Xiuhtezcatl Martinez has given TED talks and was invited to speak before the United Nations on environmental policy. At the age of 15 he spoke in English, Spanish, and Nahuatl before the UN General Assembly on Climate Change. That same year, he competed with young musicians from around the world who submitted self-produced music “to inspire the negotiations” at the United Nations Framework Convention on Climate Change with their music and Martinez’s selection “Speak for the Trees” was chosen as the Jury Award Winner. In 2015, Martinez and 21 other youths filed a lawsuit against the US Federal government, Juliana et al. v United States et al. They argue that the federal government is denying their constitutional right to life, liberty and property by ignoring climate change. In 2018, he and 13 other youths filed another lawsuit, this time against the state government of Colorado. He is the lead plaintiff in this Martinez v. Colorado Oil and Gas Conservation Commission case. In December 2018, Remezcla named Martinez in their list of “30 Latinxs Who Made an Impact in Their Communities in 2018”.  In 2018, he received a Generation Change Award at the MTV Europe Music Awards. Martinez served as the Youth Director of Earth Guardians through 2019, transitioning to co-Youth Director alongside Marlow Baines, who assumed the youth leadership role in 2020.