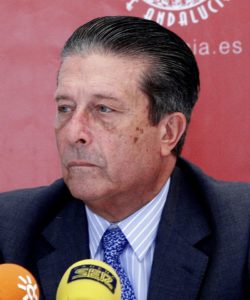 Federico Mayor Zaragoza (b.1934) is a Spanish scientist and politician, best-known as Director-General of UNESCO (1987-1999), the UN educational, scientific, and cultural organization.  Before then, he served as Professor of Biochemistry and later as Rector of the University of Grenada, a member of the Spanish Parliament, member of the European Parliament, and as Spain’s Minister of Education and Science, among other positions.  While at UNESCO, he started a Culture of Peace Program to address peace education, human rights, democracy, and ending poverty.  This led to the UN declaration of the International Year for the Culture of Peace in 2000, and the UN’s International Decade for the Promotion of a Culture of Peace and Non-Violence for the Children of the World (2001-2010), and the UN High-Level Forum on the Culture of Peace (2012).   In 1999, Mayor founded the Foundation for a Culture of Peace in Barcelona, where he serves as Chair and President.  FCP published Climate Change & Peace: The Effects of Climate Change on Global Peace and Security (2012).  Mayor is author or co-author of >100 articles and 17 books, including The Crime of Silence (2011) and The World Ahead: Our Future in the Making (2001), on such topics as population growth, humanizing cities, cleaner urban transport, a natural contract for “developing with the earth,” a cultural contract for the knowledge society, and an ethical contract for a culture of peace.