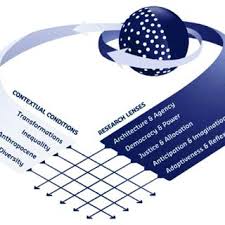 This report provides insight into the interaction of global politics and technology regarding blockchain and distributed ledger technology (DLT) by which data are recorded, shared and synchronized across a network of participants. Blockchain can be used to expedite payments, create new financial instruments, and organize transparent exchange of information. DLTs may disrupt the capacity of governance bodies to supervise and regulate economic activities by cutting out traditional intermediaries, e.g., banks. There are four basic design choices for DLT systems effecting who can see and/or influence transactions, These design alternatives make DLTs  “inherently political…encourag[ing] certain forms of interaction and specific behavior for users interacting through the network…[creating] discussion about DLT design about the governance of and through emerging technologies.”
This paper focuses on the Green Climate Fund (GCF), presently valued at ~$20bn. The fund can play a fundamental role in mobilizing climate finance to achieve Sustainable Development Goal 13. At present, GCF funding is surrounded by complex bureaucratic procedures presenting insurmountable hurdles for many prospective recipients. DLTs could dramatically increase the efficiency of moving money from the GCF to worthy countries and entities. International climate finance may be a means to “correct market failures” that have injured developing countries and to manage climate effects.
Five areas where DLTs could be leveraged to support the work of the Green Climate Fund are explored: 1) accountability and trust, 2) accessibility and the required institutional capacity, 3) country ownership, 4) impact assessment and 5) scalability.
The effectiveness of DLTs to finance climate mitigation and resilience projects depends on “the strength of a country’s digital infrastructure — the Internet, distributed and cloud computing, electricity supply, and digitized data, as well as the overall technological literacy of its population. The latter touches on political science, science and technology studies, and development studies that can resolve digital divides in a population. DLTs could widen existing inequalities and negatively impact social cohesion. These factors aggregate into the need for substantial initial investments in infrastructure and technical expertise so that funds can achieve their maximum benefit and consequences.
DLTs could mean that the control that developed countries and private entities within those controls presently exert though conventional standards and oversight could be reduced. “Developed countries are likely to b reluctant to give up that control, particularly if they consider engagement in the GCF to be in their strategic interest; [therefore] some of the most significant benefits of DLRs may also constitute political obstacles to their implementation….The deployment of DLTs requires ethical and design principles to ensure the security, inclusivity and legal compatibility of the system” equivalent to existing, conventional structures.
Because of the complex set of issues that a shift to DLTs could generate, with social cohesion being a primary concern, it is important to engage in a number of small scale “sand box” experiments. “Disintermediation has complex consequences across multiple domains (social, legal, political, financial and economic)…and should not be regarded as an end in itself.” The evolution of DLTs toward greater maturity needs to be considered in relationship to “other technological developments, such as artificial intelligence, the emerging internet of things and services, or big data.