Global Linkages: A Graphic Look at the Changing Arctic 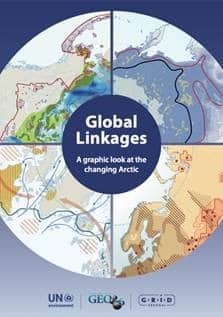 Produced by GRID-Arendal, a Norwegian foundation cooperating with the UN Environment Program, written by a team of 15 scientists and 12 reviewers.  In addition to many maps and charts, the clearly-written text warns of the melting cryosphere (ice, snow, permafrost), pesticide and industrial chemical pollutants, plastics pollution, mercury, and biodiversity concerns.  Permafrost—22% of Earth’s surface—is melting and expected to make a major contribution to CO2 and methane emissions, leading to more thawing.  A 20% decline in the current permafrost area is expected by 2040, with 50-65% decline by 2080.

Also see A Farewell to Ice: A Report from the Arctic by Cambridge University physicist Peter Wadhams (Oxford University Press, 2017, 240p) who describes Arctic methane release as “a catastrophe in the making,” creating extra global temperature rise of 0.6oC by 2040.   This is a well-informed outlier position, but worth consideration.