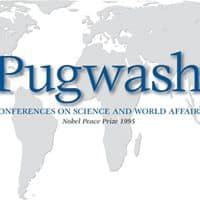 “Dialogue across divides: we have to learn to think in a new way.” A 1955 Manifesto by Bertrand Russell, Albert Einstein, and others, on the need to avoid war in the nuclear age, led to a meeting in the village of Pugwash, Nova Scotia hosted by philanthropist/industrialism Cyrus Eaton. This led to forming the Pugwash Conferences by Prof. Joseph Rotblat and others. Rotblat, the only Manhattan Project scientist to resign on moral grounds, jointly shared the 1995 Nobel Peace Prize with the Pugwash Conferences, which seek to bring scientific insight and reason to bear on threats to human security arising from science and technology in general, and above all from catastrophic threats posed to humanity. Pugwash seeks “a world free of nuclear weapons and other weapons of mass destruction…(and) to create opportunities for dialogue on the steps needed to achieve that end (and) on ways to increase the security of all sides.” International Pugwash holds 3-7 seminars/workshops/meetings annually, in different places where peace is in peril. The national branches try to design/identify/express appropriate ways and means to have people and places focus on ‘humanity.” The dialogue often draws in famous and important people. Publishes quarterly reports; Pugwash Brochure; Pugwash Newsletter; Pugwash Issue Briefs; Pugwash Occasional Papers and Briefing Books; Pugwash Quinquennial Newsletter; and Pugwash History Series. President: Jayantha Dhanapala; Secretary General: Paolo Cotta-Ramusino. [Note: David Harries, co-principal of this “S&S Guide,” is Chair of the Canadian Pugwash group. National groups with invited members are in >50 countries, but not in the US!  MM]