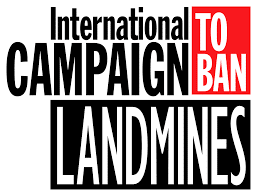 Is a “global network in over 70 countries that works for a world free of antipersonnel landmines and cluster munitions and where landmine and cluster munition survivors can lead fulfilling lives.” The Campaign “was awarded the Nobel Peace Prize in recognition of its efforts to bring about the 1997 Mine Ban Treaty.” Since then, it has been advocating for “the words of the treaty to become a reality, demonstrating on a daily basis that civil society has the power to change the world.”