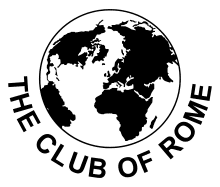 An informal association of ~100 invited Members, independent leading personalities from politics, business and science interested in contributing in a systemic, interdisciplinary, and holistic manner to a better world because they share a common concern for the future of humanity and the planet. Consists of >30 national and regional associations, the International Centre in Winterthur, a European Support Centre in Vienna, and the Club of Rome Foundation (funding).