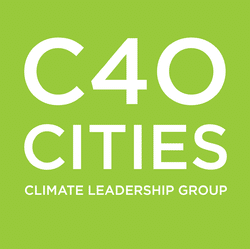 A global network of large mega cities taking action to address climate change by developing and implementing policies and programs that generate measurable reductions in both greenhouse gas emissions and climate risks. The focus on cities is based on their role of innovation hubs. Over 90 affiliated cities around the world make up over 25% of the GDP and 1 in 12 people worldwide. C40 is focused on tackling climate change and driving urban action that reduces greenhouse gas emissions and climate risks, while increasing the health, well-being and economic opportunities of urban citizens.

Clinton Climate Initiative (CCI) is a delivery partner. Funded within others by Bloomberg Philanthropies, Children’s Investment Fund Foundation, and Realdania.