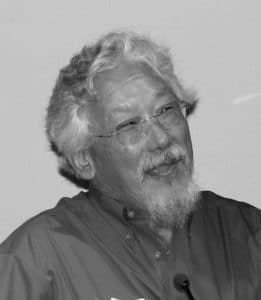 David Suzuki (b.1936) is a Canadian academic, science broadcaster, environmental activist, and co-founder in 1990 of the David Suzuki Foundation in Vancouver, with c.80 staff, to create a sustainable Canada through research, education, and policy.  He is best-known for a popular documentary series, “The Nature of Things,” seen in nearly 50 countries since 1979.  Other TV series include “A Planet for the Taking” (1985) and “The Secret of Life” (1993).  He has authored 52 books (19 for children), including The Legacy (2001), which won the Nautilus Book Award and Looking at Senses, a best-selling children’s book.  David Suzuki’s Nature Challenge newsletter promotes “Green Living Made Easy” and effective ways to conserve nature and improve quality of life.  Dr. Suzuki has received UNESCO’s Kalinga Prize (1986) for popularizing science, the Right Livelihood Award (2009), and honorary degrees from more than two dozen universities worldwide.  He was elected to the Royal Society of Canada and is a Companion of the Order of Canada.  Viewers of a CBC television series ranked him as 5th among “The Greatest Canadians” of all time.