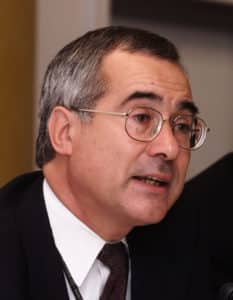 Nicholas Stern (b.1946, a.k.a. Lord Stern of Brentford), is Chair of the Grantham Research Institute on Climate Change and the Environment at the London School of Economics, where he is also Professor of Economics and Government and Director of the LSE India Observatory.  He has held academic positions at University of Oxford, University of Warwick, MIT, College de France, the Indian Statistical Institute, and the People’s University of China, and has served as Chief Economist of the European Bank for Reconstruction and Development (1994-1999), Chief Economist and Senior Vice President of the World Bank (2000-2003), and President of the British Academy (2013-2017), the UK’s national body for the humanities and social sciences.  Lord Stern is author or co-author of >100 articles and 15 books, including The Economics of Climate Change: The Stern Review (2006), stressing the cost of climate change impacts and the benefits of strong and early action, A Blueprint for a Safer Planet (2009), The Global Deal: Climate Change and the Creation of a New Era of Progress and Prosperity (2009), Why Are We Waiting? The Logic, Urgency, and Promise of Tackling Climate Change (2015), and co-author of the 2015 LSE report launching the Global Apollo Program to promote carbon-free electricity.  He was knighted in 2004 and has received 13 honorary degrees and many awards, including the Blue Planet Prize (2009), the BBVA Foundation Frontiers of Knowledge Award (2010), and the Schumpeter Award (2015).