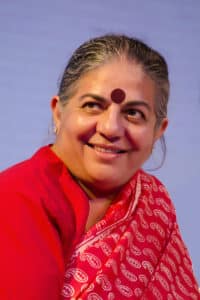 Vandana Shiva (b.1952) is a scientist and environmental activist on food and agriculture, intellectual property rights, biodiversity, etc..  She defends the wisdom of many traditional practices and critiques genetic engineering, pesticides, and corporate patents on seeds or “biopiracy”.  In 1982, she founded the Research Foundation for Science, Technology, and Ecology.  This led to founding Navdanya (“Nine Seeds”) in 1991, to protect the diversity and integrity of native seeds and promote organic farming and fair trade, and Bija Vidyapeeth (“Earth University”) in 2004, the sustainable living learning center for Navdanya.  Shiva also founded Diverse Women for Diversity (1998), chairs the Commission on the Future of Food, and serves on the National Board of Organic Standards of India and on Prince Charles’s expert group on sustainable agriculture.  She is author or co-author of >20 books, including The Violence of the Green Revolution (1989), Monocultures of the Mind (1993), Ecofeminism (1993), Biopiracy: The Plunder of Nature and Knowledge (1997, 2/E, 2011), Water Wars: Privatization Pollution and Profit (2002), Earth Democracy: Justice, Sustainability, and Peace (2005), Soil Not Oil (2008), and Making Peace With the Earth (2013).  She received the Right Livelihood Award (1993) and Sydney Peace Prize (2010), and has been called the “most powerful communicator in Asia” and one of the seven most powerful women on the globe (Forbes, 2010).  Also, see www.vandanashiva.com