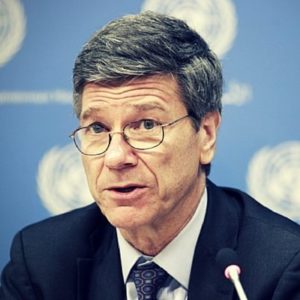 Jeffrey Sachs (b.1954) is a world-renowned economist, University Professor at Columbia University, and former director of its Earth Institute (2002-2016).  He is currently director of the Center for Sustainable Development at Columbia and the UN Sustainable Development Solutions Network, chair and co-founder of SDG, USA to promote the UN’s sustainable development goals, co-founder of the Millennium Promise Alliance to alleviate poverty by 2030, and a founder of the Deep Decarbonization Pathways Project.  He has served as an advisor to UN Secretary-Generals Antonio Guterres, Ban Ki-Moon, and Kofi Annan; to Pope Francis and John Paul II on their encyclicals; and to heads of state of many countries for their economic development.  He is author or co-author of many books, including The End of Poverty (2005), Common Wealth: Economics for a Crowded Planet (2008), World Happiness Report (2010, with two others), The Price of Civilization: Reawakening American Virtue and Prosperity (2011), To Move the World: JFK’s Quest for Peace (2013; on President Kennedy’s June 1963 “Peace Speech”), The Age of Sustainable Development (2015, Foreword by Ban Ki-Moon; on sustainable development as the central concept of our age and the SDGs), and Building the New American Economy: Smart, Fair, and Sustainable (2017).  Sachs has received 21 honorary degrees and many awards, such as the Blue Planet Prize (2015), World Sustainability Award (2017), and Boris Mints Institute Prize (2017).