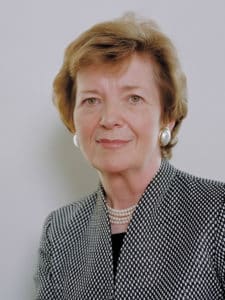 Mary Robinson (b.1944) is best known as the first female president of Ireland (1990-1997) and the UN High Commissioner for Human Rights (1997-2002).  She founded Realizing Rights—The Ethical Global Initiative (2002-2010) to put human rights standards at the heart of global governance and is founder and president of the Mary Robinson Foundation-Climate Justice, a center for leadership and advocacy to empower the poor and achieve people-centered and sustainable development.  She is Chancellor of the University of Dublin (1998-present), Chair of the International Institute for Environment and Development, Chair of the Institute for Human Rights and Business, and an active member of The Elders.  Former positions include president of the Club de Madrid, honorary president of Oxfam International (2002-2012), and Chair of the Council of Women World Leaders. Her two books are A Voice for Human Rights (2007) and an autobiography, Everybody Matters: My Life Giving Voice (2012).  She has received many honorary degrees and awards, including the Sydney Peace Prize (2002), the US Presidential Medal of Freedom (2009), the Dame Grand Cross of Merit (2010), and the Knight of Freedom Award (2017).