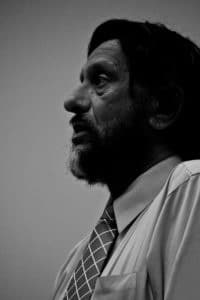 Rajendra K. Pachauri (b.1940) is an economist and environmental scientist, former chair of the UN’s authoritative Intergovernmental Panel on Climate Change (2002-2015), and former Director General of The Energy and Resources Institute (TERI) in New Delhi (1982-2016), with >1,250 employees working toward global sustainable development and sponsoring an annual World Sustainable Development Summit.  Pachauri has served as a research fellow at the World Bank, President and then Chair of the International Association for Energy Economics (1988-1990), and Chair of the World Energy Council (1993-1995).  He initiated the Lighting a Billion Lives initiative in 2008 to facilitate clean cooking and lighting solutions in 13 countries and 23 Indian states.  He represented the IPCC in accepting the Nobel Peace Prize shared with Al Gore in 2007, and has been awarded many other prizes, such as Officer of the Legion of Honor by France in 2006 and Padma Vibhusan in 2008—India’s second-highest civilian award.  He was chosen as a Foreign Policy Top 100 Global Thinker in 2011, and is a co-author with three others of A Planet for Life 2015—Building the Future We Want (TERI, 2015; 336p).