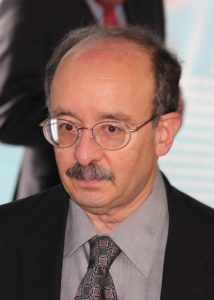 Amory Lovins (b.1947) is a physicist, environmental scientist, and co-founder of the Rocky Mountain Institute in 1982, where he serves as Chairman and Chief Scientist.  He is widely known for his concept of “soft energy paths,” a 1976 essay in Foreign Affairs, on an alternative future where efficiency and renewable energy replace fossil and nuclear fuels; expanded to a book: Soft Energy Paths: Toward a Durable Peace (1977).  He is also known for the “negawatt revolution” concept (1985), where units of electrical power saved by conservation or efficiency can be a commodity traded across time and space, the energy-efficient “hypercar” concept (1994), and promoting energy generation at or near the site of use.  He has given testimony in eight countries, briefed 23 heads of state, and authored/co-authored >31 books and 480 papers, including Brittle Power: Energy Strategy for National Security (1982, 2001; with L. Hunter Lovins), Factor Four: Doubling Wealth, Halving Resource Use—Report to the Club of Rome (1997, with Ernst U. von Weizsäcker and L. Hunter Lovins), Natural Capitalism: The Next Industrial Revolution (1999; with Paul Hawken and L. Hunter Lovins), Small is Profitable (2002), Winning the Oil Endgame (2004), and Reinventing Fire: Bold Business Solutions for a New Energy Era (2011).  Lovins has received ten honorary doctorates and many awards, such as the Right Livelihood Award (1983), a MacArthur Fellowship (1993), Heinz Award (1998), Time Hero of the Planet (2000), Blue Planet Prize (2007), and Volvo Environment Prize (2007).