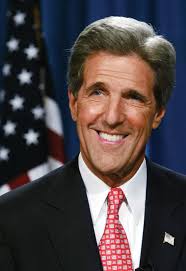 Kerry is an American politician and diplomat.  Kerry drew public attention as a decorated Vietnam veteran who became an anti-war activist as spokesperson for the Vietnam Vets Against the War. He served as a prosecutor and as Lieutenant Governor of Massachusetts, and was a United States Senator from Massachusetts from 1985 to 2013. He was the Democratic nominee for Presidency of the United States in the 2004 election, which he lost to George W. Bush. He served as Secretary of State in the Obama administration from 2013-2017. In that role, he signed the Paris Climate Accords, where his speech emphasizing the moral imperative to act and to create binding commitments to lower greenhouse gas emissions for the welfare of future generations won praise, even from those who disagreed with it. As Secretary of State, Kerry also initiated the 2013–2014 Israeli–Palestinian peace talks and negotiated landmark agreements restricting the nuclear program of Iran. He is now President-elect Biden’s Special Envoy for Climate and would be a member of the United States National Security Council (NSC). This appointment marks the first time that the NSC would have an official dedicated to climate change issues and to addressing the climate crisis as one affecting national security. Additionally, along with his wife Teresa Heinz, Kerry is a founder and key funder of Second Nature, an American non-profit committed to accelerate climate action in, and through, higher education that has worked with over 4,000 faculty and administrators at more than 600 colleges and universities. Kerry is the author of six books, including This Moment on Earth (Public Affairs, 2007, 240p).