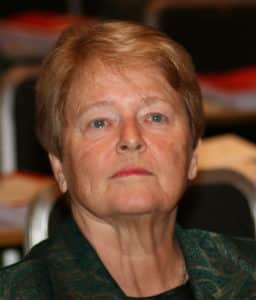 Gro Harlem Brundtland (b.1939) is a physician who trained in Norway, and became interested in public health and environmental issues, as well as women’s rights.  She served as Norwegian Minister for Environmental Affairs (1974-1979), and briefly as Norway’s Prime Minister in 1981, followed by longer periods in 1986-1989 and 1990-1996.  In 1983, she was invited to establish and chair the World Commission on Environment and Development, widely known as the Brundtland Commission.  The landmark 383-page commission report, Our Common Future (Oxford University Press, 1987), also known as the Brundtland report, recognized environmental limits to economic growth and advocated sustainable development, leading to the first UNCED/Earth Summit in 1992, also known as the Rio Summit.  Brundtland went on to serve as Director-General of the World Health Organization (1998-2003) and as a UN Special Envoy for Climate Change (2007-2010).  She is a founding member and Deputy Chair of The Elders, a group of distinguished world leaders addressing human rights issues, and is also a member of the Club of Madrid and the Council of Women World Leaders.  Brundtland has received numerous awards, and is often seen as “The Mother of Sustainable Development.”