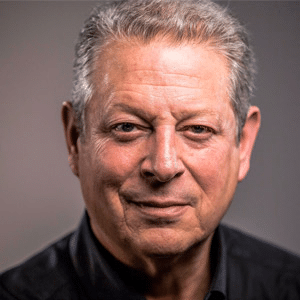 Al Gore (b.1948) is a former US Senator from Tennessee, where he lives, former US Vice President (1993-2001), and, as Democratic nominee for President in 2000, he lost a highly contested election by a very slim margin.  He is author of Earth in the Balance (1992), An Inconvenient Truth (2006), The Assault on Reason (2007), and The Future: Six Drivers of Global Change (2013), a 558-page overview of the global economy, the global mind, world politics, “outgrowth” of human civilization approaching limits of natural resources, new technologies changing humankind, and impacts on the natural world such as the climate crisis.  He is well-known for his two feature-length documentary films, “An Inconvenient Truth” (2006) and “An Inconvenient Sequel: Truth to Power” (2017), on the rise of extreme weather.  Along with the IPCC, Gore was selected as the 2007 Nobel Peace Prize laureate for informing the world of the dangers posed by climate change.  In recent years, he founded and chairs the Climate Reality Project to train people to promote solutions for the global climate crisis, and is co-founder and chair of Generation Investment Management, an investment firm that finances sustainable companies.